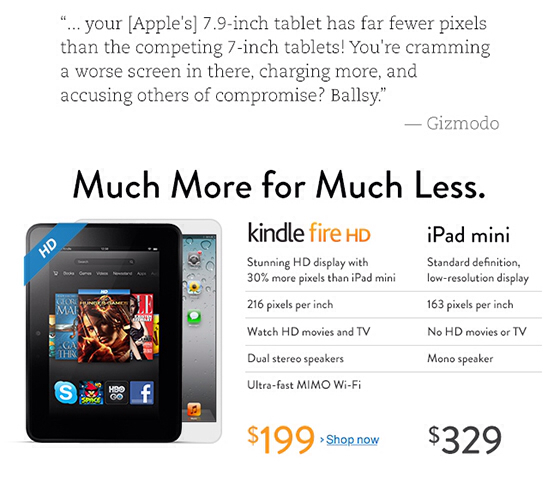 Jeff Blagdon, writing for The Verge:

Not content to continue being the butt of Apple’s anti–7-inch-tablet haranguing, Amazon is firing back with a prominently-placed ad on its homepage for the Kindle Fire HD. Under the tag line “Much More for Much Less,” Amazon touts the device’s strongest features, including its higher-resolution display, ability to display HD movies and TV, and dual stereo speakers. A quote sits atop the ad from Gizmodo’s reaction to Tim Cook’s earnings call statement, during which the CEO said Apple would “never make” a seven-inch tablet. Here’s the full quote:

“…your [Apple’s] 7.9-inch tablet has far fewer pixels than the competing 7-inch tablets! You’re cramming a worse screen in there, charging more and accusing others of compromise? Ballsy.”

I’m a fan of both Apple and Amazon.. Hell, I do as much of my work around Amazon’s Web Services as I do around Apple App Development…

This latest move isn’t really much of a surprise.. Companies have to take what ever edge they can get.. I just don’t see it making much difference either way..