It’s been almost a year since I originally posted how to Upgrade an ASUS Chromebox - more RAM, bigger SSD, and Ubuntu. It’s currently the most popular post on this site, and I thought I’d revisit it with instructions on upgrading the newer model M075U.

The original model was the M004U, with the following specs:

I recently upgraded this with the M075U, which starts with the following specs:

This post will cover how to go about upgrading the hardware, and get it up and running in a dual boot mode to ChromeOS and Chrubuntu.

Here are the parts I used;

This comes bundled with a wireless keyboard and mouse.

Not much has changed in terms of instructions, the boxes are virtually identical aside from the new box being a newer model with a faster processor.

Getting into the Hardware

First off, you don’t need to make any kind of system image before modifying the unit, you can simply remove the installed SSD and RAM and insert your new parts and go from there. In the instructions below, you’ll make a USB stick that can be used to restore the disk to a factory fresh image of Chrome OS.

To do this, first remove the four rubber feet on the bottom of the unit. You may need to use a small flat head screwdriver to help get them off. Don’t place them anywhere sticky side down!

You’ll then find four screws underneath where the feet were, remove them. Then carefully remove the bottom of the unit. This may be a little difficult, so you may try and slip a small screwdriver in the vents to help. Don’t scratch it up or use force.

You should now be taking a look inside, and marvelling at the relative simplicity of the device!

You’ll see the RAM chip(s), which can be easily removed by opening the clips on the edges and lifting outward. 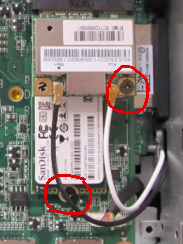 Place your new SSD in the slot, and put the tiny screw back in to hold it. Now put the wireless/bluetooth card back in place, and put it’s screw back in as well.

Now put the bottom of the case back on, put the screws back in, and put the feet back on. You’re done with the hardware upgrade!

Now you’ll need to install Chrome OS onto your new empty SSD. To do this, visit this page and follow the instructions for your operating system to create a USB stick;

This tool is a chrome extension but it creates the USB stick beautifully, just choose your chromebox model and it will install the recovery disk for you.

Now, to get started:

Now you are ready to do the install of Ubuntu if you so desire. If you just want a fast ChromeOS box, you are done!

Find the developer switch on your machine (it’s in a little hole on the back of the left side next to the SD slot). Very carefully press a small paper clip end into this hole and press the power button and the remove the paperclip. When it boots, press ctrl-D to turn off OS verification mode. It should prompt you to turn on Developer mode by using the paper clip again without pressing the power button. It will now boot into developer mode, and take several minutes to prepare itself.

When it has booted, hit Ctrl-D and it will come up to the setup screen, make sure your correct networking is selected. Select continue and accept the agreement.

At the sign in screen press Ctrl-Alt-F2 to get into a shell.

Login with user chronos and hit enter, …it should not ask for a password.

Then issue the command to boot into the development bios by default;

(if you don’t do this it will erase Ubuntu on next boot. You can undo this by booting again to the shell and issuing the command; chromeos-firmwareupdate --mode=normal)

When it has booted, hit Ctrl-D and it will come up to the login screen, and now press Ctrl-Alt-F2 to get into a shell.

Login with user chronos again and hit enter, it should not ask for a password.

At this point you can download custom update scripts that will install the appropriate kernel, and a choice of several flavours of linux.

To use install Chrubuntu, type the command;

And after it has downloaded the script, type the command;

It will prompt you to choose the appropriate size in Gigabytes you wish to give to ubuntu, I gave it 100

Let the machine reboot (still into ChromeOS), it will say it’s repairing itself and reboot. Now choose the language and networking again, and at the login prompt press Ctrl+Alt+f2 to get a shell and give the username chronos (no password)

You’ll need to run the script again, so type the command;

And after it has downloaded the script again, you can install by using parameters, where;

So to install the default you would enter;

or to install ubuntu-desktop lts, type;

Now it will run for quite a long time, depending on your connection speed. It will prompt you for locale and other settings, most users can just hit enter.

In fact, once the download starts, I highly suggest you go grab a sandwich or something, anything is better than watching the download count slowly roll around.

When it is finished, it will prompt you to reboot by hitting Enter.

You should now verify that everything is as you like it. You can switch between ChromeOS and Chrubuntu by using the following commands;

To make it always boot Ubuntu, go into Terminal and type;

To make boot to Chrome;

(if, for some reason your keyboard doesn’t work on boot, try reconnecting it)

You’re done! You can stop here unless you need to always boot to Ubuntu, and want to write some scripts to switch envronments, or want to change the default user.

Boot to Chrubuntu, and Script switching back and forth

To always boot into chrubuntu, at the Google sign in screen press Ctrl-Alt-F2 to get into a shell.

Login with user chronos and hit enter, it should not ask for a password.

Just wait for it to restart, and it will boot up into your alternate OS

To make it boot to Chrome every time;

Note: don’t hit Ctrl-D anymore at the OS Security screen, just wait for it to come up… this for some reason didn’t work on the next boot, it did however work from then onward. It also boots up amazingly fast.

WARNING: if you switch the developer switch back off YOU WILL LOSE YOUR UBUNTU INSTALL and go back to a completely reset ChromeBox.

You may want to do yourself a favor, and set up some scripts, so that you can boot to chrome from the terminal in Ubuntu by typing chromeos, and to Ubuntu by doing Ctrl+Alt+F2 and typing ubuntu. To do this do the following steps.

When booted into Ubuntu, find your .bashrc file for the default account user, and add this to the bottom using the vi editor; (you can look up how to use vi on the web, but to put it simply, you would type vi .bashrc, scroll to the bottom, and on a empty line press the “a” key to add text, type in the line below, and when done hit escape, then type :wq to save and exit from vi)

After you have saved the file exit the terminal by typing;

now open a terminal again, and type the command;

It should prompt for a password, you should enter user…(we’ll change it later)

Wait for it to boot after beeping, and do a Ctrl+Alt+F2 to get to the chrome shell, login with user chronos, and enter the command;

And edit the file (hit the a key to get into insert mode just like in vi) and add:

Now in Ubuntu, you can type in a terminal the command; chromeos …and you will boot into chrome …and in Chrome, you can hit Ctrl-Alt-F2 to get the shell, login as chronos, and type ubuntu to boot into ubuntu!

You won’t have to do anything when the dive is rebooted or powered up, just wait a few seconds and it will beep a couple of times, and then boot up into whatever OS was running previously.