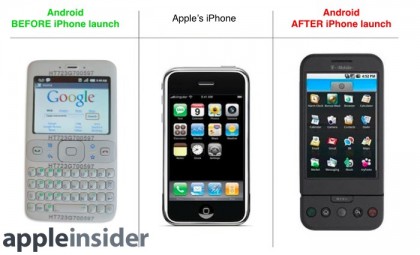 Before and after versions of Google’s internal “software functional requirements” documents released in the
Apple vs Samsung trial this week show that prior to Apple’s 2007 iPhone debut, Google’s vision for Android was a simple button phone running Sun’s Java.

It’s well known that Google’s original plan for Android shifted gears dramatically once Apple unveiled its own iPhone in early 2007. However, the documents exposed in court show how great that shift was and how little Google originally planned to disrupt the status quo in mobile phones.

Google acquired an existing Android project in 2005, which was essentially an offshoot of Danger, the Java platform powering TMobile’s SideKick slider phone. Both Danger and Android were founded by former Apple employee Andy Rubin.