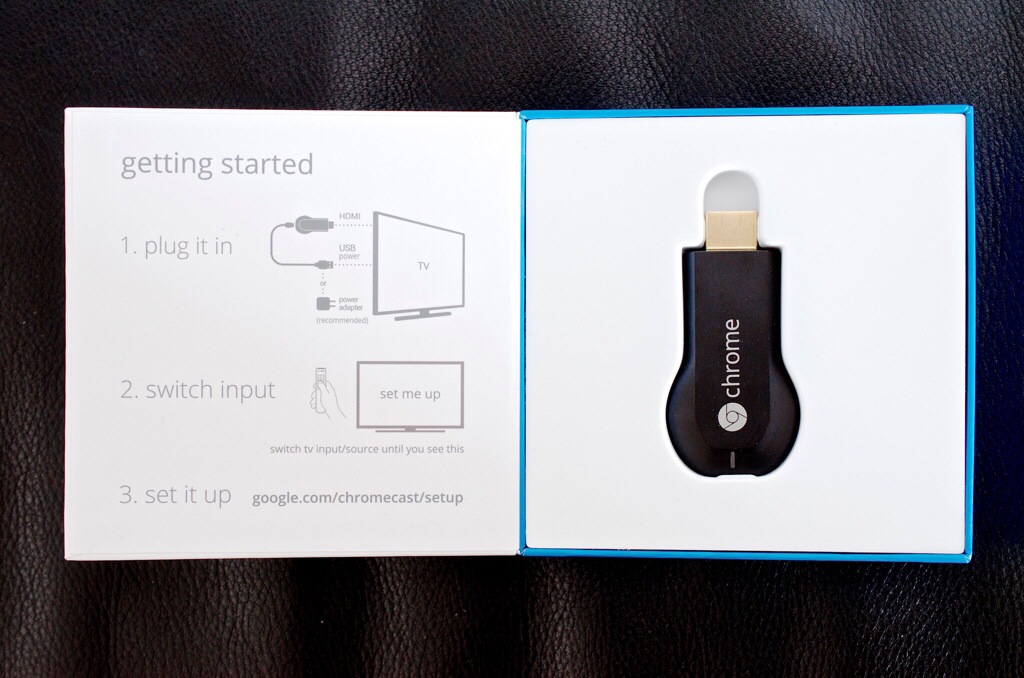 Before we get started, yes, I know the Chromecast is not new, but it just launched here in Canada, and so I’ve spent the past two weeks playing with a review unit.

What is the Chromecast?

First, a quick recap: Chromecast is a $35 streaming dongle that plugs into your TV’s HDMI port. You can use it to stream online videos from YouTube, Netflix and elsewhere, and use your computer, mobile phone or tablet as a remote control. It doesn’t have any kind of separate app store or user interface on your TV – everything gets controlled from the PC or mobile device.

The key word here is control: Your phone doesn’t stream videos directly to your Chromecast dongle. Instead, it just tells the device which video it should stream from the web. That means that you can use your phone for something else, or even turn it off, once the stream starts.

This kind of remote control capability only works with apps and sites that directly support Chromecast. In addition to that, users can also stream any web content directly from their computer’s Chrome browser, as long as they have a special Chrome extension installed.

One interesting feature of this, is you can choose to “cast” one tab only, while keeping your other tabs open as well. This can be handy during presentations.

Setting Up the Chromecast

Setting up the Chromecast is pretty straight forward, you plug it into your TV, Then use an app to follow the instructions to set up. You can get the Chromecast up and running in minutes.

Streaming from Netflix or other apps

Streaming to the Chromecast is a little interesting, since it doesn’t exactly stream from your device as much as it sends the URL to it, so if you are watching Netflix on your iPad, iPhone or computer and want to send it to the Chromecast, you just hit the cast button and it sends the Netflix stream over.

As a parent, I also found it really helpful that Netflix on Chromecast lets me track the progress of a video on the mobile device while it’s playing on TV.

No more “just a few more minute” excuses. And the fact that I can switch from one device to another, launching playback from the Netflix website on my MacBook, then pause it later with my mobile phone, is pretty neat.

Youtube and Google Play Music and Movies also work pretty well for streaming to the Chromecast, but if you want to use Rdio for it, you’ll need to send it to the Chromecast from a web browser on your computer.

Streaming from your web browser

As I mentioned before, Chromecast does offer the ability to stream a tab from your computer’s Chrome browser straight to your TV. This is similar to screen sharing in a teleconference, meaning that the browser captures everything in a new video.

The idea behind this screencasting feature is to enable you to stream anything that’s not available through a native app yet.

I tried it with a few video streams from various websites that let you watch shows from their sites, and while it worked, it definitely degraded the quality to a less HD experience. It worked well enough, but it was sometimes painful to watch shows that I’d rather watch in HD.

I also tried to play a few local videos by simply dropping them onto the Chrome browser tab, and experienced similar mixed results. This may be acceptable if you don’t have any other way to get local videos onto the TV, but it’s definitely not great, which is why Google still calls this feature beta. Luckily, there are a number of apps in the works that will enable you to play local content without compromising on picture quality.

I also used browser-based streaming to listen to music from Rdio.com, which wasn’t too bad, and the Rdio player actually looked pretty nice on the TV. However, even with this, I occasionally encountered some weird glitches, including changes in tempo for a second or two.

Currently, you can’t “cast” from Chrome on your iOS devices, but this is apparently in the works.

Hulu, Vimeo, HBO Go and others have already pledged their support, and a small army of independent developers have started to hack away and bring their own apps and games to the device. All of this means that Chromecast will get substantially better over the coming months.

But even without any of those improvements being present today, I definitely don’t regret spending $35 for the dongle. Should you buy one too? I would say yes, especially if you’re looking to finally bring Netflix viewing to that TV in your bedroom or den that hasn’t been connected yet.

But even if you already have a smart TV, or watch Netflix with the game console that’s otherwise collecting dust in your living room, Chromecast may be worthy of a consideration. The device takes a lot of friction out of bringing online video to the living room, and in turn makes TV watching a lot more enjoyable.

I’ve been a long time Apple TV user, so I can’t post this without answering the question about which I prefer.

Myself, I do prefer the Apple TV, simply because I can use AirPlay a little more than I can use the “casting” to the Chromecast currently. It’s easy enough to mirror my MacBook’s entire screen to the Apple TV for watching a movie, or playing a game on my iPad, but Chromecast is pretty close to it so it’s really a toss up.

In the end, your main factor may just be the price, Chromecast is $35 and Apple TV is $104, and that price difference may be all it takes to make a difference for you.