There’s also the usual Apple keyboard with Origami Workstation, but that hasn’t changed from when I first reviewed it, so I won’t review that here.

We’ll do the worst first… This case has some promise you fitted the iPad into a case with attached keyboard, but that’s where the promise ended…

The idea is you put your iPad inside the case and it works similar to a laptop, open the lid, go to work. Nice idea, ZAGG has made several cases like this one over the years, and I’ve liked them, but this time, they failed.

One thing they missed, was the “tablet” mode, this mode is where you fold the tablet over the keyboard and hold it in portrait or landscape mode as a regular keyboard. ZAGG has included this on nearly all of their previous keyboard cases and it’s the feature everyone likes, but they decided to leave it off this time.

The case itself is made of plastic and feels very plastic-y, you expect it to actually break at anytime.

Another problem is it’s very top-heavy, you can watch the iPad nearly fall over when you take your hands off the keyboard.

The only saving graces to this keyboard case are the lit-up keys to make it easier to type in low-light, and the final nice feature is that the laptop-like layout gives you plenty of angles to view the screen from, but that’s where the nice features end.

Basically, give this one a pass, unless you like the light up keyboard…

Another old-faithful, my previous Ultrathin keyboard case traveled with me to several conferences and served me well so I definitely wanted one for the iPad Air.

And I have to say that Logitech did not disappoint with this case either, following along my previous Ultrathin review, this keyboard case is definitely a recommend. 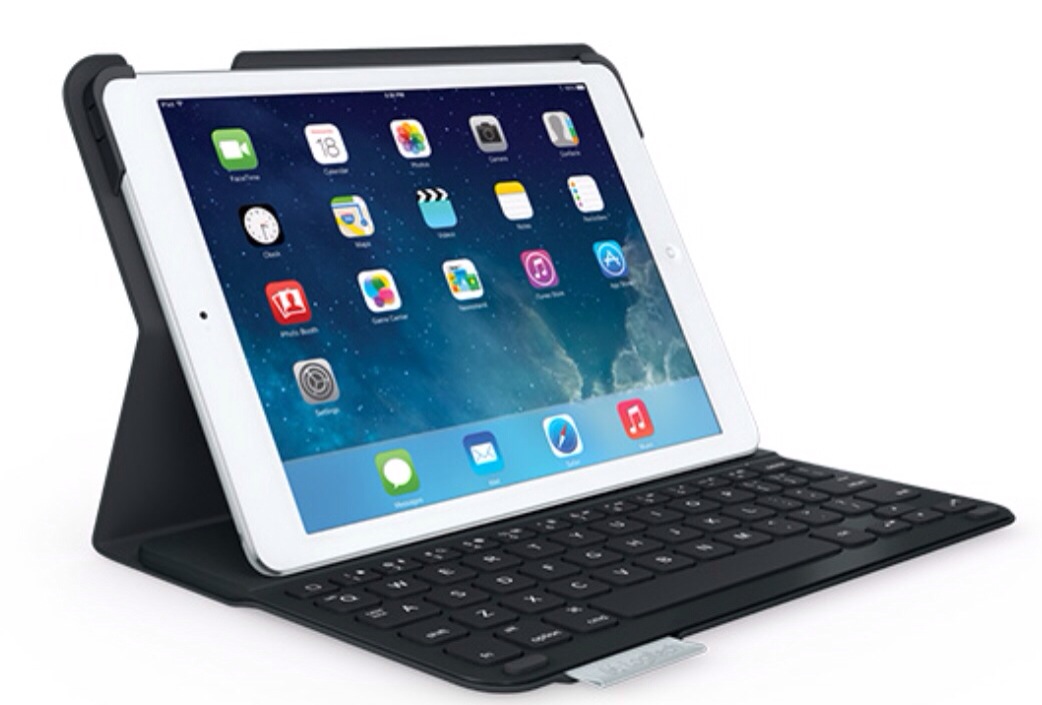 Logitech’s Ultrathin Folio keyboard case is interesting, it follows the same idea as the Ultrathin Keyboard case, but actually wraps the entire iPad in a protective cover, so that you don’t have to detach the iPad from the keyboard cover, you instead just open and let the magnets do the job.

This Keyboard case also features the “tablet” mode that the ZAGGKeys folio case was missing, so that is a plus.

I found the keys work similar to the regular Ultrathin, with one difference..

For some reason, Logitech, in deciding to make this case a little longer, decided to remove the caps lock and tab keys and instead tie them to the Q and A keys using the fn key.

This was an odd move, but once you get used to it, it works pretty well and is hardly noticeable.

I do like that the keys are a little bit bigger than the Ultrathin keys, it’s a slight increase, but it makes a difference when you are typing things, like a chapter for your next book, or a review.

If you want full protection for your iPad, take the Folio, otherwise, I’d go with the Ultrathin Keyboard.