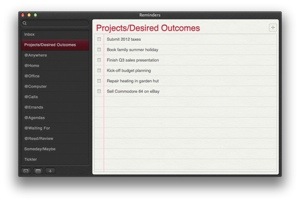 Reminders seems simple on the surface, but it’s packed with location-based notices, repeating tasks, list sharing and device syncing. Fechner recommends setting up the six standard GTD lists: inbox, projects/desired outcomes, next action, waiting for, someday/maybe and tickler. Once those are setup inside Reminders, you can create separate sublists with locations and everything else.

We don’t usually think of Reminders as an app that’s made to work with the GTD systems, but Fechner proves that it’s perfectly capable once it’s set up properly.